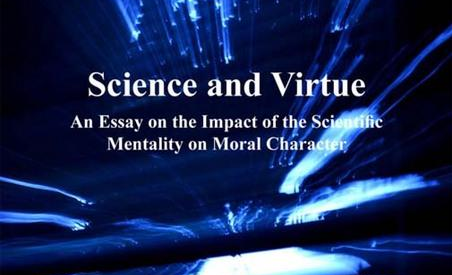 “[W]e cannot understand how various scientific and technological knowledges are made, and made authoritative, without appreciating the roles of familiarity, trust, and the recognition of personal virtues. And the reason such a claim may seem perverse is that both these knowledges and the means by which they are produced are widely accounted impersonal.”

With these words, Steven Shapin opens his book The Scientific Life (p. 1). Here, Shapin is trying to focus attention on the relation between science and the character traits of scientists. How are virtues and science related? What is the relation between good scientists and good science? What is the impact of science on practitioners of science? Usually, these questions are ignored in the philosophy of science. But there are exceptions, and Louis Caruana’s book, Science and Virtue: An Essay on the Impact of Scientific Mentality on Moral Character, is one. This post is exactly about this book. Caruana’s objective, in his own words, is an attempt to highlight “the link between knowledge and practice in the sciences” (p. vii) and to explore to what extent the scientific “mentality” (whatever this means) has “effects on moral character” (p. viii). In particular, “[t]he aim of this book consists in determining how the particular mindset characteristic of natural science stimulates growth in virtue on certain fronts” (p. 6). The strategy chosen by Caruana is straightforward. He starts by decomposing the scientific ‘mentality’ into four domains (observation, the logical structure of scientific method, explanation, and the evaluation of scientific theories). Each chapter of the book is about one of these domains, and he tries to establish how each of these domains can impinge on the deeper level of the person by influencing scientists’ dispositions towards the good. In sum, this book is about virtue ethics and the particular relationship between the practice of science and human flourishing.

It should be noted that Caruana is not planning to do all of that by following the lead of the so-called ‘practice turn’ in science studies. He is an analytic philosopher in the traditional and technical sense of the expression. In the Preface, he points out that his approach “is analytical rather than psychological, sociological or phenomenological” (p. vii).  At the same time, he does think that striving for precision in this context (as an analytic philosopher would do) is counter-productive because the investigation itself is on a topic for which precision could be a limiting factor. Therefore, the investigation “will leave out the entire landscape indicated by very general, philosophical questions that cannot be handled by strict logic” (p. 12).

By following an Aristotelian approach, the functioning of each domain of scientific mentality may move between two extremes, or vices.  Accordingly, the right functioning is the mean, or virtue.  For example, when dealing with observation, Caruana says “that the virtuous person is the one who acts within the perimeter of a right balance between the scientific and the manifest image” (p. 99), where the manifest image is the set of folk’s common beliefs that can be undermined by scientific observation. Here, the scientific mentality seems to be an obstacle to human flourishing because it tends to overemphasize the scientific image at the expense of the manifest image. On the other hand, scientific mentality can also be helpful in cultivating virtues per se. For instance, the scientific method can foster the cultivation of two virtues that he calls “reflective equilibrium” and “prudential risk-taking.” In other words, the scientific mentality can sometimes lead to virtues, but in other situations, it must be properly handled to avoid the cultivation of vices. By dealing with very abstract examples and with a traditional philosopher of science’s ideas, Caruana establishes that science, in principle, can affect moral character. Nonetheless, his specific aims are less clear: Is he describing the potential effects of being trained as a scientist on human flourishing overall? Or is he trying to understand which virtues a scientist should inculcate in order to be a good scientist? Or is he trying to establish connections between being a good scientist and being a good person?

How can we address these more specific questions? On the one hand, we need to make sense of how the practice of science stimulates the cultivation of specific virtues and how these virtues can also contribute to the flourishing of the scientist qua human being. But while such virtues are useful for the flourishing of persons, they are also contextual to the scientific practice, and there are virtues that make a scientist not only a good person, but also a good scientist. In other words, there are specific virtues cultivated within the practice of science that play a crucial role in training scientists, and hence they are central in shaping a better science. To put it in a slogan, virtues make better persons and a better science. I do not mean this as an abstract principle, but rather as a sort of working hypothesis.

The contribution of Caruana to this multi-dimensional approach is to show that, in principle, science can make persons better or worse. However, once we organize our claims around a solid set of empirical evidence about the practice of science, then we can understand the multiple dimensions of this claim. There are many ways to gather data. One can ask scientists themselves how they think about the relations between virtues and science, as Robert Pennock is doing in The Scientific Virtues Project. Another option is to gather empirical data directly in the laboratories where the practice of science happens, as we do in the project Developing Virtue in the Practice of Science. But even when one does not have the possibility of being part of one of these empirical studies, he can nonetheless investigate the literature in history and sociology of science and find interesting suggestions about the relation between science and character traits and dispositions.

Originally published by Emanuele Ratti at ctshf.nd.edu on August 11, 2016.